Destination Fishing Across The Globe 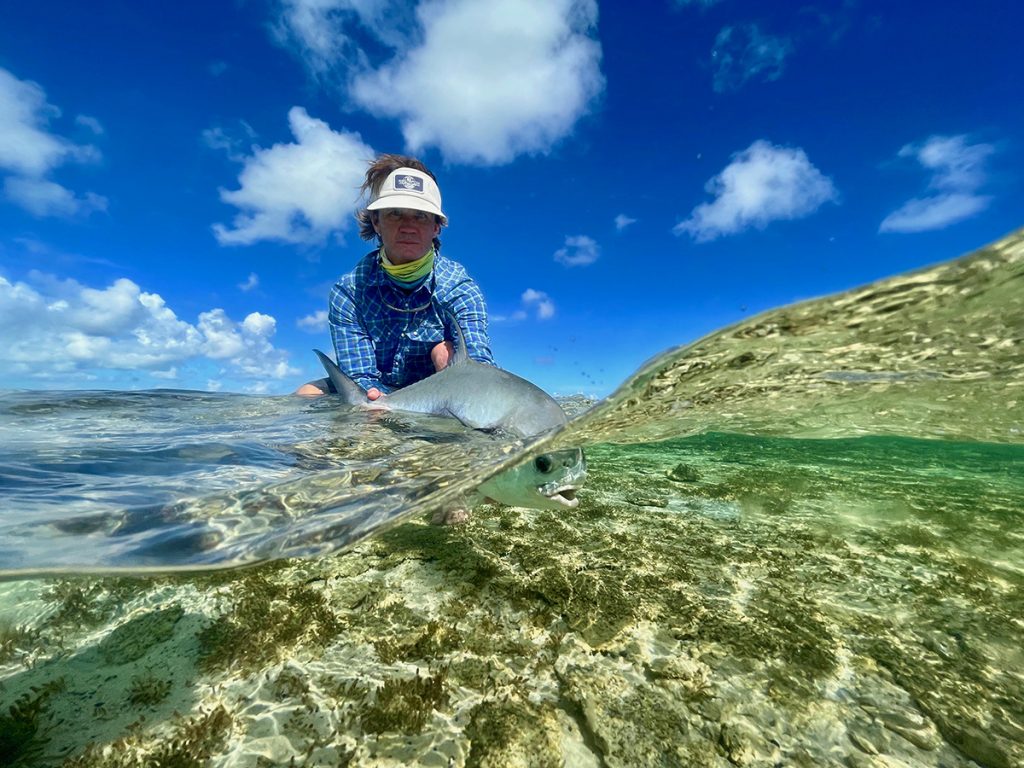 Mike has been immersed in the sport of fishing since the age of five when he caught his first trout on the fly. Both his Grandfather and Father were avid anglers who introduced him to the sport at an early age, exploring rivers and lakes in the Adirondacks and Poconos. His Grandfather helped found Deep Water Cay Bonefishing Club in the Bahamas, where Mike had his first taste of saltwater fishing and where Mike later worked for a year.

A graduate of St. Lawrence University (1996), Mike moved to Denver, where he received an MBA in Marketing from University of Denver Daniels College of Business (2000). To help pay business school expenses, Mike worked in a local Fly Shop in Denver, exploring Colorado fisheries every chance he could get.  After graduating and attending one job interview, Mike opted out of the real world and instead used the remaining funds from his student loans to purchase a plane ticket to SouthEast Asia where he spent months backpacking between 4 countries.

With a business marketing degree in hand and his passion for travel intensified, Mike dreamed of a career in the fishing business full time.  But it wasn’t until he was recovering from a major surgery in 2001, where he donated a portion of his liver to his father, that he realized that he needed to work in a field he was truly passionate about.  He has worked full time in the fishing business ever since.

Mike spent a season with Rock Creek Anglers in Saddlestring WY before making his way over to Jackson Hole, WY / Victor, ID where he would end up taking the job as the Vice President of WorldCast Anglers in 2001.  After the company sold in 2008, Mike continued on as the President until he resigned in 2021 to spend more time with his family, pursue creative outlets and new opportunities.

While Mike is passionate about all types of fishing and hosts many different types of trips, Permit fishing with a fly consumes him and he attributes that to the forced meditation in the pursuit.

His love of permit fishing led him to the competitive arena where he won the Del Brown Permit Tournament, and was a two time winner of the March Merkin Permit Tournament and a three time winner of the Black Tail Invitational permit tournament.  Mike has been featured in numerous publications and featured in several films namely, Corazon,  Scorpion Expedition, Carpland, Frontera Norte.

Mike currently sits on the board of The South Fork Initiative, and has previously served on the Friends of the Teton River and the Teton Valley Foundation and is proud to work alongside the following companies: ORVIS, Costa Del Mar, Adipose Boatworks, Scientific Anglers, and YETI.

Mike resides in Jackson Hole, WY with his wife Jenn, two children, Cooke (9) and Rumsey (6) and dog, Moxie.  In between trips, sports practices and dance recitals Mike can be found with his family exploring the mountains and rivers in his backyard, camping, rafting, mt. biking, skiing, hunting and, of course, fishing.

Episode 14.
In this episode I sit down with Stephen "Sulli" Sullivan. Sulli is a fixture in the outdoor industry and the Jackson Hole community. In 2011, he founded Stio, where he still serves as CEO. Stio was founded to inspire connection with the outdoors through beautiful, functional products infused with mountain soul. We also discuss Sulli’s former gig as the co-founder and president of Cloudveil Mountain Works from 1997 to 2010, non-competes and plenty more!

Listen to this episode via the link in my bio.

Got a chance to spend a day with @windrivercanyon & @paulcollamer at the end of May. What started off as a slow pleasant float in the morning turned into one of those days in the afternoon. Special.

What you don’t see in this photo is the beatdown that we endured during our week in Belize. We experienced a low-pressure system the entire time and spent half of the days without a sighting or a cast. We fished very hard and played the hand we were dealt really well. We laughed, shared stories, and ate well, and all were aware how fortunate we were just to be fishing. But the truth is, staying hyper-focused for 10 hours a day knowing it’s very likely you aren’t going to cast is hard. Great people make fishing beatdowns much better.

Episode 12 of Permit to Think is now live!
In this episode I sit down with Justin Hays, general manager at The Lodge at Palisades Creek — an Orvis Endorsed fishing lodge on the banks of the famous South Fork of the Snake River. We explore Justin’s adventures in getting to Jackson Hole from Minnesota and military school and plenty more!

Listen to this episode via the link in my bio.

This fish ate this fly and then coughed this up. Some fish just like big meals. There is something about fishing big dries in the spring with snow-capped mountains in the backdrop on the right day that is very addictive.

These fish are perfect examples of how you should always keep an open mind in regards to techniques and listen to your guide. I had never fished to permit the way in which @ningalooflyfishing wanted me to. It worked ...

A new episode of Permit to Think is now live.
In this episode, I sit down with Mikey Hemkens (@muggsnation), and we discuss the fact that my dog liked Mikey more than me as well as calving, hanging up the snowmobile guide helmet, youth team USA fly fishing, a life of hunting, and plenty more.
Listen to this episode via the link in my bio.

Not all permit have a birthmark or the black blotches — this one was special. Some scientists believe the birthmark and other colorations are enhanced when the fish is stressed out — this one was having a panic attack.

Episode 11: Cooke & Rumsey Dawes - Family Interlude
In this episode we take a little detour from the format used in Season 1, which we will do once a year. We will return to the regular format in Season 2 and are excited about it, but let me explain why we’re changing things up. When asked why I do my podcast, I give the truthful answer that it’s extremely fulfilling. When I am doing it, the front end and the back end are time consuming and challenging at times, but each time I make the effort I learn something new and I learn something about the people I know or I want to know in a non-distracting format. Being present and not being distracted is reward enough these days. But the answer is deeper than that, so I will try to explain ... I also introduce Cameron Bernholz to the show — the man behind the keyboard.
You can listen to this episode at the link in my bio.

While scrolling through photos from the time warp of 2020, I came across this beauty. Usually when you spot golden trevally you might as well throw the fly anywhere but where you see them as they disappear so quickly. Luckily this one was following a manta ray. We came home to a different world after that trip.

New episode of Permit to Think.
In this episode I sit down with Josh Graffam. Josh is currently the National Sales Manager for Umpqua Feather Merchant. We discuss Permit Fishing, his time with Fly Fishing Team USA, Umpqua, Brush Creek Ranch and Jack Dennis Sports. Listen to this episode via the link in my bio.

Got to love it when a plan and group come together, even if said plan was over two years in the making, and @nepptuna’s guest appearance was the pinnacle!

Trying to get photos while fishing solo is always a funny endeavor to me. Didn't really nail it, but still funny. The dorsal fin on this little pup was really special.

I first had the pleasure of fishing with Serge 18 years ago, and it was quite the honor to fish with him again. Legend. More to come on this one, several years of patience and positive attitudes were rewarded with weather, amazing people, laughs, one of the prettiest places on the planet, oh yeah, and some fish.

New episode of Permit to Think!
In this episode I sit down with Noah Robertson (@noahrobjh) aka Scribe 2. We discuss building Mountain Khakis, Noah's time at Cloudveil and Mammut and more recently N&N Collaborative, and his role as the Chief Brand Officer at the iconic Mangy Moose in Jackson Hole.

Prior to 2020, I had been spending a lot of time in the Indian Ocean, for good reason. Excited to be currently headed back in that direction. Looking forward to seeing some friendly faces and possibly some sickle fins in the Seychelles.

Morning scouting session in Cameroon. Working my way downstream, should have gotten a fly to this one, not the next one. Further downstream they were throwing darts.

A new episode of Permit to Think is available.
In this episode I sit down with Jon Yousko (@jy406) aka JY. We discuss his new endeavor with Skwala Fishing, Jake Burton, Punk Rock, Skateboarding, Simms Fishing and trusting your intuition.

New episode of Permit to Think.
In this episode, I sit down with Dan Oas, and we discuss "The Day" in the Seychelles, trying to get to Smithers, Team USA Fly Fishing, and Dan's current role as the development associate at Teton Youth & Family Services in Jackson Hole, WY.

Fishing at night immersed in the sounds of the West African wilderness awakens the senses in a completely different capacity. I ran through the gamut of emotions but soon became more present while falling into the rhythm of the surroundings, that is, until the headlamps were allowed to be switched on and it was time to go to battle. The four monsters we hooked broke fly lines, threw hooks and won. Haunted. We did manage some good ones nonetheless. The daytime fishing was a completely different animal, going from 5-weights and 5x to 9-weights and wire was quite the contrast before it was time to settle into the darkness again with your 12-weight. Not too many places left as raw and wild as this ... I will be back ...

The Energy of Tragic Optimism

As the light crests the horizon we head directly into the ball of fire that seems to move remarkably quick when it is rising, although it seems to move as quickly when it is setting as well, reference point I guess.  We took the lagoon highway instead of the Ocean

It is always nice when like minded anglers connect the dots and when I pay attention to it, it happens more than I realize.  The same feeling at times when you have reminded yourself thirty times to check in with a certain friend and as you reach for your human encompassing device, they call you.

Start a project with us!

Please visit my podcast PermitToThink give a listen, review
and please pass along to anyone that might dig it.

Permit To Think spawned from Mike Dawes’ 30 years of fishing travel, the people he has met along the way and an intense curiosity of their stories.

Start a project with us!

Get Ahold of Us!